Fantasy Ireland is a 13 X 11 minute Irish animated comedy series set in a fantastical, dysfunctional version of Dublin City where the humorous and the bizarre are part of everyday life. 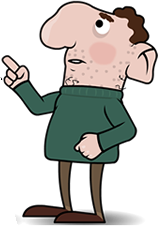